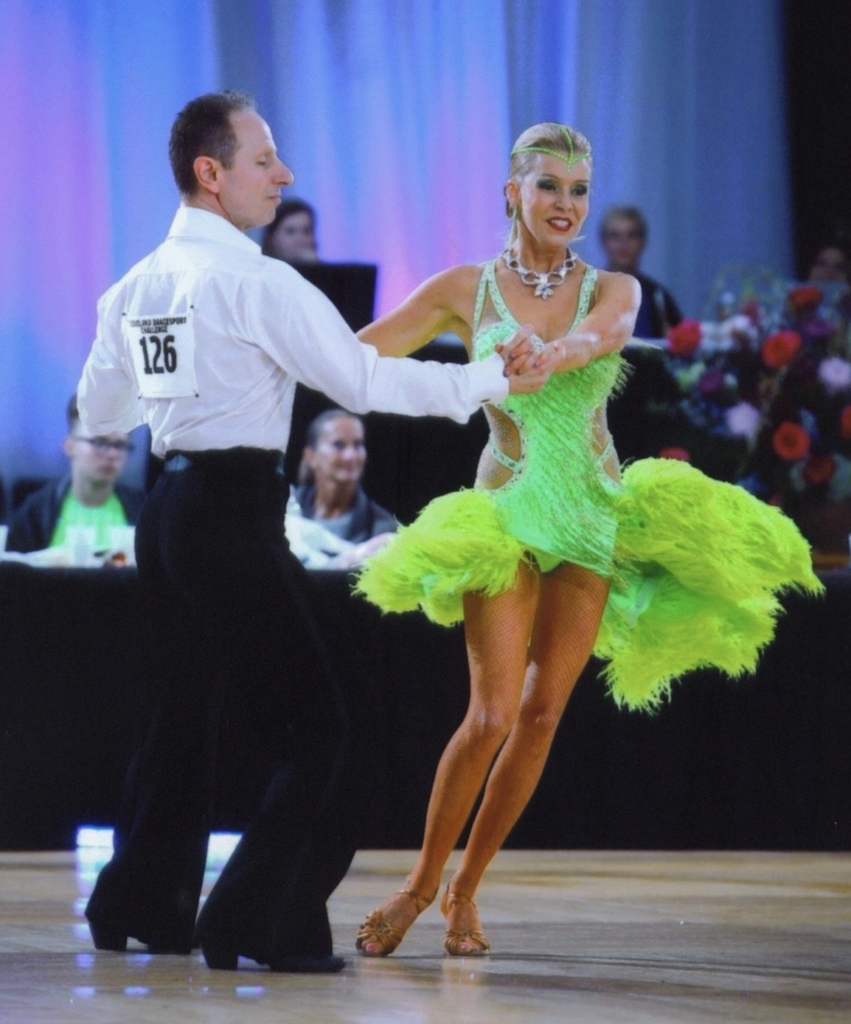 For years, we had fun running into United States Pro/Am American Smooth champion, Darla Davies, along with her professional dance partner, Jim Maranto, both at the studio, where we often exchanged friendly banter, and at competitions, where she was known, not only for her Smooth dancing, but also for her fashion-forward costumes, some of which we even purchased for our own students. She was a veritable fixture whom we could always count on seeing. So, when she was gone from competitions for nearly a year, we felt her absence and wondered what had happened.

Now, in her own words, Darla gives us, as Paul Harvey used to say, “The Rest of the Story,” in her new book, Who Said I’d Never Dance Again? A Journey from Hip Replacement Surgery to Athletic Victory. But, as publicist Darcie Rowan states, “More than a memoir from a champion athlete, this book is a positive plan for finding the best doctor for your needs. Plus, Darla explains how to understand fully about the diagnosis, process, surgery, physical recovery, and the secrets of sports psychology behind a dramatic recovery that leads back to an active life.” 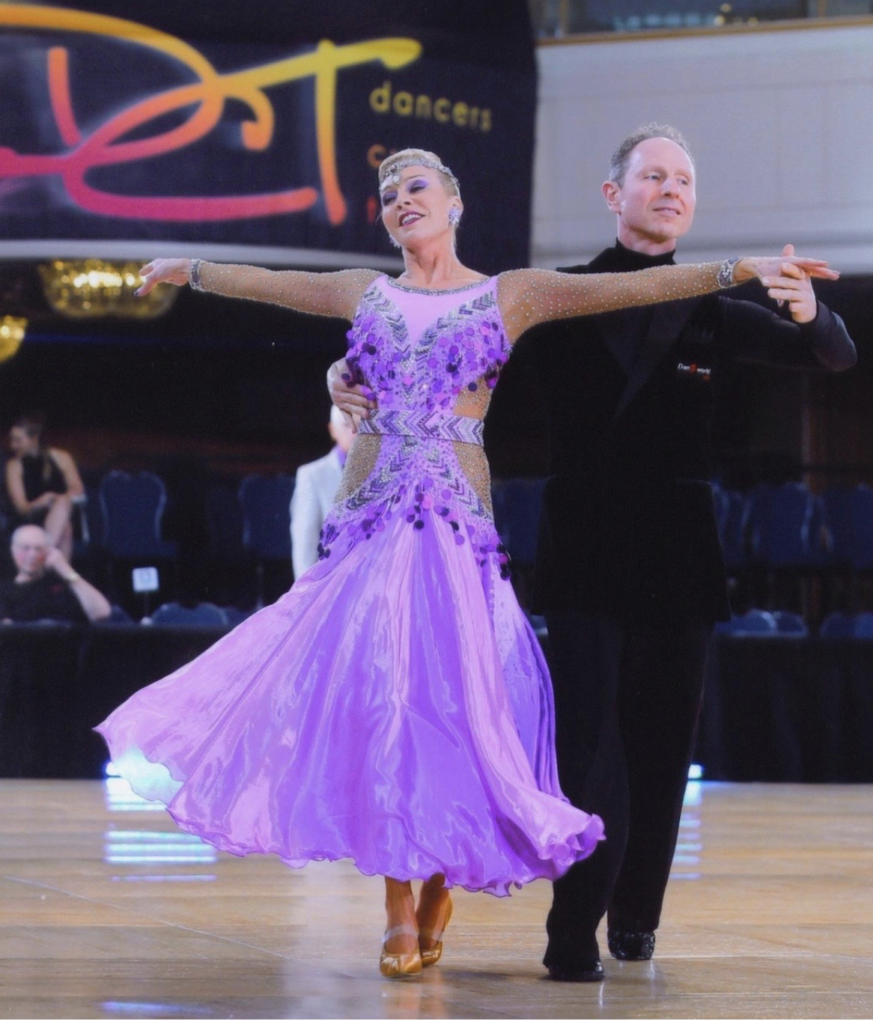 What we particularly like about Darla’s book, though, is that it fits right in with some of the philosophy that we tried to share in our blog post Where There Is A Will To Dance, There Is A Way. In a nutshell, we said:

If you feel like you are too old or don’t have the physical ability that you used to….if you are still alive and vertical, you’re not too old… As long as we have our health, really, the only thing stopping us from accomplishing our goals…is we ourselves. Even then, there are now countless examples of differently abled people who have not allowed physical hindrances to stop them from pursuing their passions. Start where you are now, with what you have. It is better than never starting at all, which is the only sure way to fail.

So, when her publicist reached out to us and asked if we would like to share a bit from the book on our blog, we jumped at the chance. Here, then, is an excerpt from Who Said I’d Never Dance Again? A Journey from Hip Replacement Surgery to Athletic Victory: 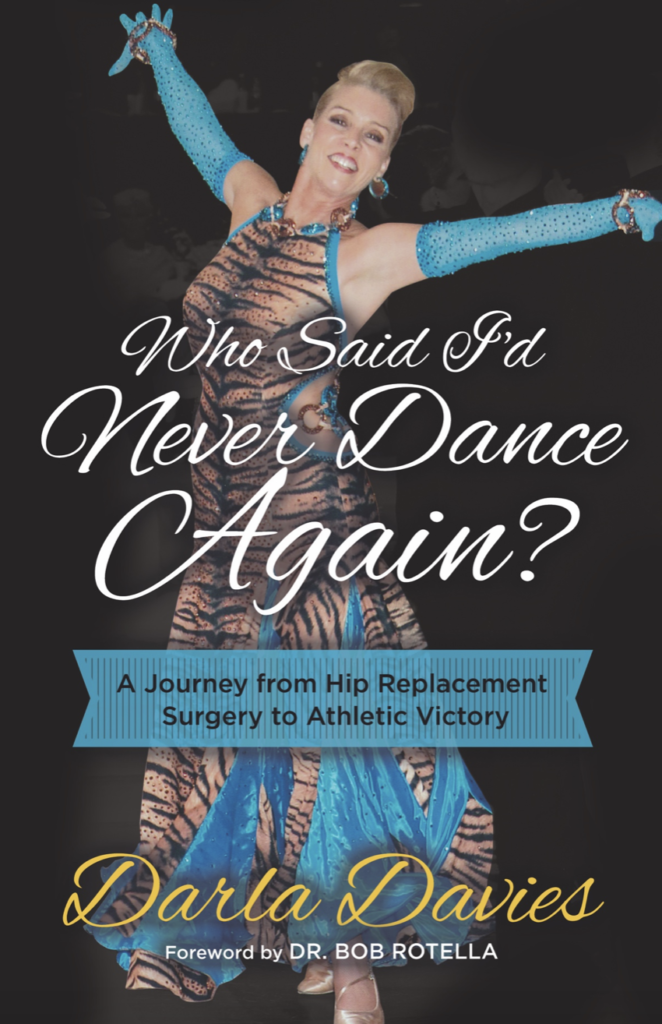 This has been adapted from Who Said I’d Never Dance Again? A Journey from Hip Replacement Surgery to Athletic Victory, 2019 by Darla Davies. Published by Morgan James Publishing.

About four months after my surgery, I progressed to basic dance steps and drills along with my gym exercises. Jim and I took it slowly by just doing the basic Waltz and Foxtrot for a couple of weeks. I was naturally fearful about placing my full weight on my left leg with that new hip. It felt odd and somewhat weak at first, but when I realized that I was not going to fall over, I became more confident.

I was anxious to try some Cha Cha and Rumba to test my Cuban hip action. Prior to my hip surgery, that hip rotation in the Rhythm dances was really painful.

One day I stood in front of the mirror at the dance studio and thought, This is it; this will be the true test of my new hip: a nice, slow, Rumba box step. I recalled the piercing pain that I had experienced the last time that I had tried to make my hips do those Rumba boxes. Trying to forget the past, I took a step back on my right leg, settled my weight, and pulled my right hip back. Next, I stepped sideways on my left leg. I was so afraid. I wondered if my new left hip was going to accept the weight and the required hip rotation. My excitement was building as I settled my weight onto my left leg and pulled my left hip back. As I closed my right foot to my left, settled my weight, and pulled my right hip back, I looked in the mirror feeling absolutely delighted as I saw my own smile looking back at me.

A couple of private dance lessons were underway in the studio while I was in the corner making this earth shaking discovery. Unable to contain my excitement, I turned around and shouted at anyone who would listen, “It doesn’t hurt anymore! No more pain! I can do a Rumba box and it doesn’t hurt!”

They all chuckled, and shared in my extreme elation. Just to be sure, I did Rumba boxes, and Cucarachas for another ten minutes. My reflection in the mirror was still smiling back at me. 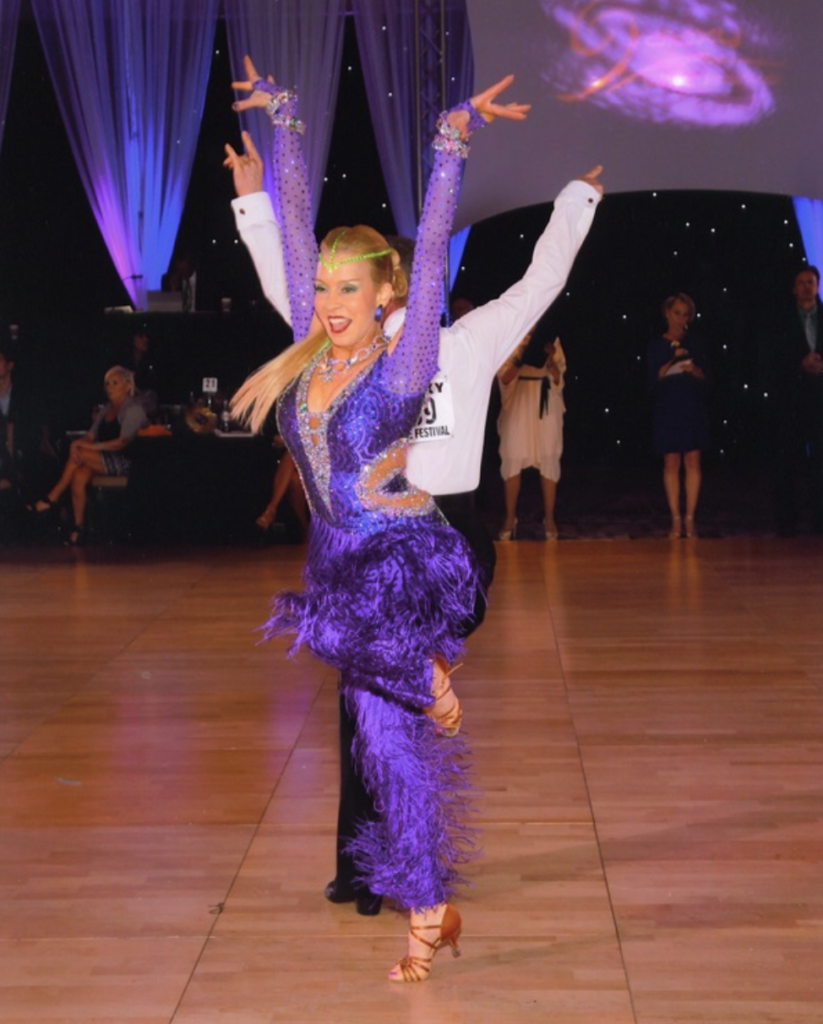 After dancing moderately in my very low-heeled practice shoes for about a month-and-a-half, I switched over to my two-and-a-half-inch high heels. The transition was not a problem, and I was feeling sturdy and confident. Soon Jim and I went back to practicing our Waltz, Tango, Foxtrot, and Viennese Waltz routines.

Although my left leg was so much stronger than what it had been prior to the surgery, there was lingering muscular pain. During hip replacement surgery, the muscles around the hip are cut, and it can take over a year for them to reattach and mold around the titanium implant. I could live with this small amount of muscular pain, because it was nothing compared to the debilitating joint pain that I had endured in the past.

Seven months after my surgery, Dr. Hedley assured me that my X-ray looked perfect, and that any pain in my hip area was residual from what I had been dealing with prior to surgery. Dr. Hedley proudly encouraged me to go ahead and dance in competitions.

“Do anything you want. Just don’t get tackled or slide into base,” he said. We both laughed. No, I did not aspire to play football or baseball. I just wanted to be a competitive amateur ballroom dancer.

I was amazed at how well I was progressing with my new hip. Having been consistent with my physical therapy exercises, I was feeling both confident and capable. In spite of continued minor muscular soreness in the hip area, I was feeling reasonably well supported. I had been practicing my four smooth dance routines (Waltz, Tango, Foxtrot, and Viennese Waltz) for a few weeks, so it felt like the right time to try out my new hip at a competition. One might have expected me to feel apprehension and fear about dancing on the new hip after nearly a year off, but I was remarkably relaxed. Previous thoughts of tension and insecurity were replaced with uplifted feelings of strength and confidence—almost jubilation. I went from pain, weakness, and suffering to having it all erased. Certainly this must be qualified as a miracle. I felt like a jockey, who after a long recovery from an injury, was back in the saddle again and ready to ride the race. My leg was strong, and for the most part, pain free, and because of this, I could physically do more so my dancing was much improved. I looked forward to showing everyone how I could run down the dance floor like a fast horse (well, at least that is how I perceived it in my own mind). 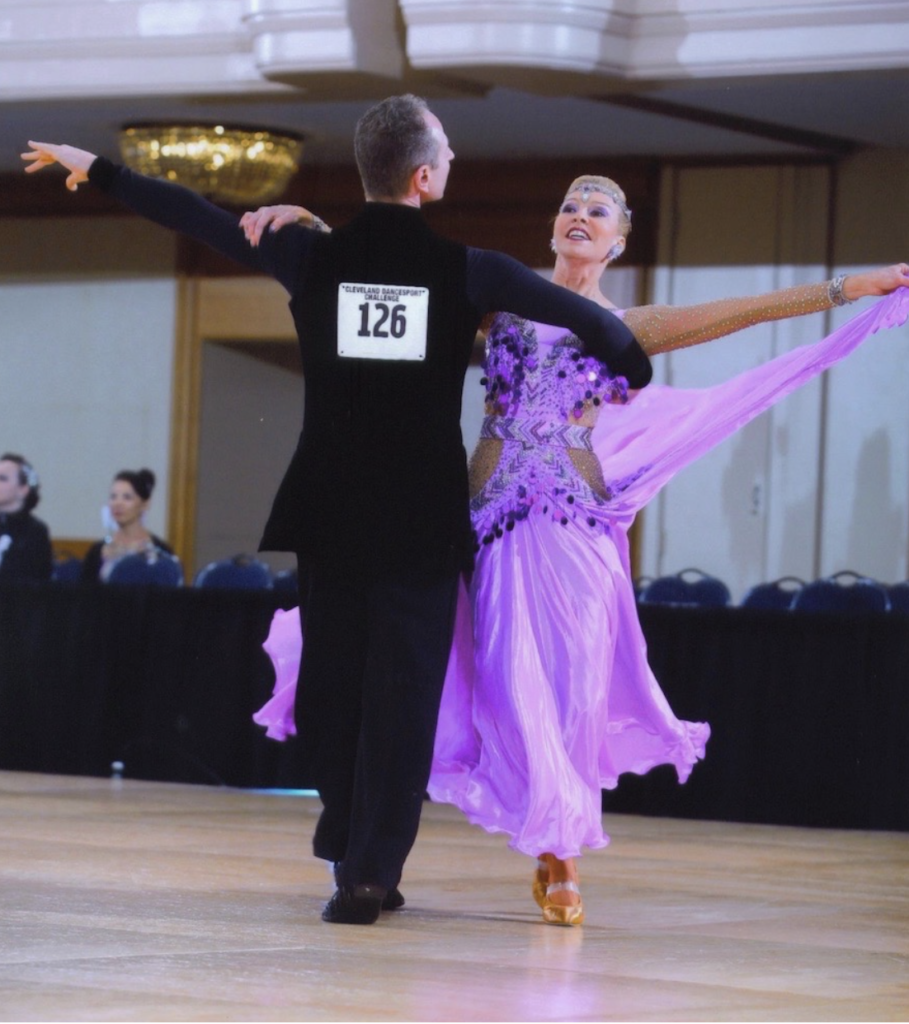 I chose the Chicago Crystal Ball Competition for the debut of my new hip. I felt comfortable with this medium-sized competition for my first comeback attempt. Stamina is always a concern when one has to dance several one minute, fifteen second heats in a row. I would have to dance four heats with only a couple minutes to rest before dancing another four heats. This was not an ideal situation, because it had been eleven months since I had danced in a competition. I would much rather have danced the first four heats, and then had at least a fifteen or twenty minute rest before having to put out the energy to do it all again.

My hip and I handled the situation well, and I won all events that I entered, including the big multi-dance scholarship event so coveted by all Pro Am competitors.

For any doubters not believing that a hip replacement recipient can return to ballroom dancing at the top open gold level of Pro Am competition and win—believe it.

Hopefully, Darla’s journey will inspire you. We are thrilled to have her back on the dance floor and wish her all the best.

If you would like to learn more about the book, you can connect with Darla Davies on: